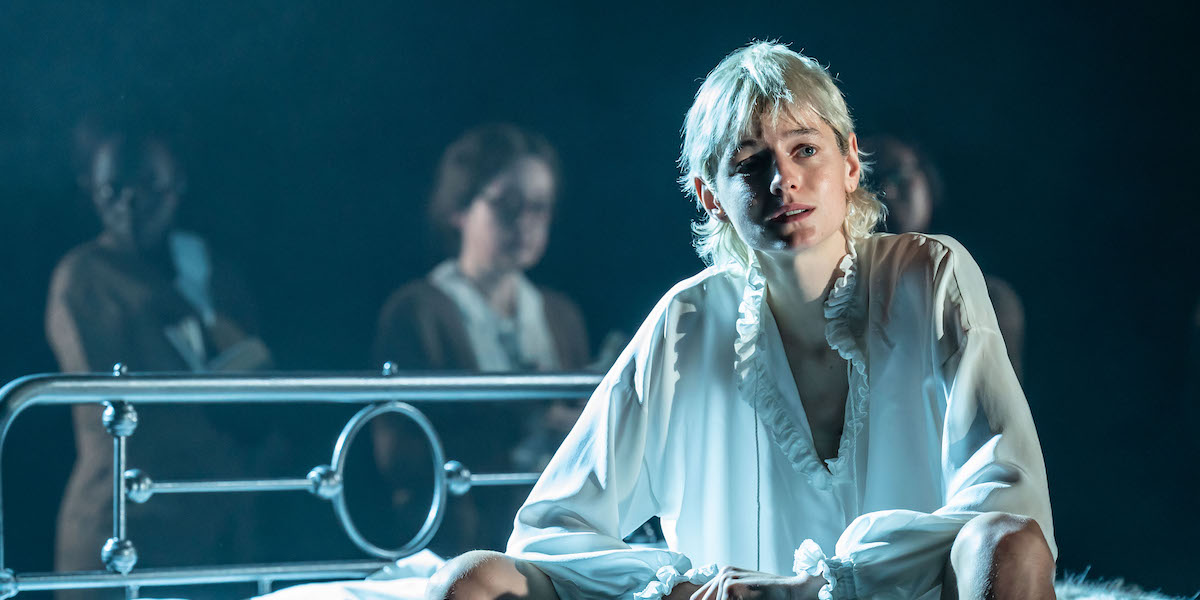 How do we define those most fundamental questions in life: who we are and who we love? And what happens when our feelings about gender, sexuality and identity come into conflict with rigid social structures? A century ago, Virginia Woolf ploughed headlong into what feels like a shockingly modern debate with Orlando, her forward-thinking 1928 novel. Now, Emma Corrin – who rose to fame as Princess Diana in The Crown – stars in a new stage version of Woolf’s remarkable work.The non-binary-identifying Corrin is particularly exciting casting for Orlando, an Elizabethan nobleman who wakes up one day to find that he is now physically a she, and who then proceeds to question the distinctions of gender as the centuries pass (Orlando is immortal and forever young, too). We know that the character is anatomically male at the start of the production, thanks to a flash of prosthetic genitals, but the transformation is left deliberately, and effectively, ambiguous.Instead, Woolf’s playful tale shows up the absurdities – why should Orlando have to eat daintily as a woman, but not a man? – and the raging inequalities: Orlando can no longer inherit the family estate when he becomes female. Amusingly, some elements remain the same, too. Society keeps pressuring Orlando to marry, presenting first a collection of eligible wives, then potential husbands.Orlando is essentially an extraordinary love letter from Woolf to her paramour Vita Sackville-West, written to capture all of her many and contradictory facets. That boundless generosity comes blazing through Neil Bartlett’s adaptation: the joy of seeing Corrin’s androgynous, fiercely independent Orlando slipping in and out of different guises, boldly seeking adventure and growth, and pursuing lovers of the same or opposite sex, simply because that’s where happiness lies.There are profound moments that speak soberly to us, as well – most poignantly when Orlando emphasises, twice, that when he changed gender, some people wanted to kill him. That rings out with terrible force during a World Cup in a nation where homosexuality is criminalised, and at a time when many in the trans community face hostility and violence.Michael Grandage’s nimble production also captures some of Woolf’s formal inventiveness. A chorus of Woolfs (fracturing her identity between them) narrates in fragmented, overlapping, layered language, glorying in the power of words to create and complicate. And a wonderful Deborah Findlay, acting as Orlando’s housekeeper and, here, dresser, breaks the fourth wall with panto vigour.However, in zipping through hundreds of years in just 90 minutes, Bartlett resorts too often to comic zaniness – Horrible Histories style. There are so many quotes and references that it grows distracting, whether it’s lyrics from Cabaret, the peerless final line of Some Like It Hot, or even a riff on the Just Eat ad, alongside dodgy cod-Shakespearean blank verse.Likewise, with casting that is cheerily gender- and colour-blind, Orlando ceases to be such a radical figure; it’s just one more person putting on a costume. That means nothing is “real”: not just the exterior constructs that Woolf was challenging, but the people within them as well, reduced to cameos. In particular, I wanted more of Lucy Briers’s world-weary Elizabeth I, and Millicent Wong’s smouldering princess and shrewd sex worker. Lampshading the latter as the “working-class supporting character” in a comic aside doesn’t excuse this use of her.And yet this Orlando worth seeing for Corrin alone. Their performance is a glorious feat of shapeshifting, from wide-eyed boy to swaggering, sexy nobleman and self-possessed lady – while always retaining the soul of the character, their curious mind, quick wit and passionate heart. Corrin’s Orlando feels deeply: “I could taste her,” they gasp as lust overcomes them, and their heartbreak is all-consuming.Though Bartlett references how the past can speak to the here and now, his script stops short of really engaging with contemporary concerns. He over-emphasises some fairly obvious takeaways (of course you were better off as a man than a woman in most of recorded history, and still today really) and is too heavy-handed, even slightly tasteless, in how he prefigures Woolf’s suicide.But I was charmed by Peter McKintosh’s evocative design, which whisks us from the great frost of 1607 (dry ice and exquisite stillness) to a raucous Russian banquet, sumptuous tent in Constantinople, or the splendour of court – all juxtaposed with blasts of rock music. A flawed but engaging experiment, and one given a beating heart by the magnificent, mercurial Corrin.Orlando is at the Garrick Theatre through 25 February. Book Orlando tickets on London Theatre.Photo credit: Emma Corrin in Orlando (Photo by Marc Brenner)