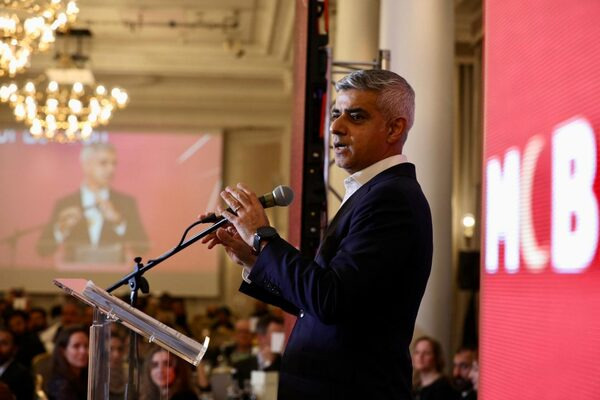 Leading British politicians have lionized an Islamist group blacklisted by the government because of its officials’ support for terror and anti-Semitism.
On November 25, the Mayor of London, Sadiq Khan, addressed the 25th anniversary dinner of the Muslim Council of Britain (MCB), one of Britain’s leading Islamist organizations.
Speaking to a crowd of current and former MCB officials and the group’s supporters, Mayor Khan declared: “Since its founding, the MCB has realized its vision of helping to shape a more just and fairer society. I want to pay tribute to all the Secretary Generals this evening, to all the elders who recognised the importance of establishing the MCB.”
The MCB’s “elders,” however, are prominent Islamists with a long history of spouting and encouraging extremism. Most were part of an Islamist network known as Jamaat-e-Islami.

The MCB’s “elders,” however, are prominent Islamists with a long history of spouting and encouraging extremism.

Writing in the Guardian in 2005, journalist Martin Bright warned that the leaders of MCB and many of its affiliate organizations were inspired by Maulana Mawdudi, an Islamist ideologue from South Asia whose writings “call for a global Islamic revival” and influenced Sayyid Qutb, “usually credited as the founding father of modern Islamic radicalism and one of the inspirations for al-Qaeda.”
Indeed, a report published by the British Government’s Department for Communities and Local Government explicitly noted the MCB’s “linkages to Islamist movements like the Muslim Brotherhood and the Jama’at-i Islami.”
Founded in 1997, the MCB has kept true to its extremist roots. Over the past decades, it has organized boycotts of Holocaust Memorial Day, its officials have openly expressed support for the Hamas terrorist group, and the organization has even successfully used its influence over government to exclude moderate Muslims from government programs and events.
Even today, the organization’s loyalty to its radical founders is clear. Founders and MCB luminaries at this year’s anniversary dinner included Sir Iqbal Sacranie, a key organizer of the protests and threats against novelist Salman Rushdie, who once said: “‘Death, perhaps, is a bit too easy for him … his mind must be tormented for the rest of his life unless he asks for forgiveness to Almighty Allah.”

The IFE has told its members that through Islamic law and “jihad,” it aims to build an “Islamic social and political order,” free from music, television, and “free mixing with women.”

Sacranie was joined by former MCB secretary-general Muhammed Abdul Bari, once chair of Jamaat-e-Islami’s European arm, the Islamic Forum of Europe (IFE). According to documents uncovered by the Telegraph¸ the IFE has told its members that through Islamic law and “jihad,” the IFE aims to build an “Islamic social and political order,” free from music, television and “free mixing with women.”
These organizations are closely interconnected. The IFE is based at the East London Mosque, which is a close partner of the MCB and sponsored the anniversary dinner at which Mayor Khan spoke.
It is noteworthy that Khan, a leading official of Britain’s Labour Party, agreed to speak, given that, in 2009, it was a Labour government that finally severed relations with the MCB, after journalists uncovered that MCB officials and affiliates were among signatories to the Istanbul Declaration, a document that advocated attacks on British soldiers and Jewish communities.
Now under Conservative rule, the government’s blacklisting still remains in force, with Downing Street recently stating: “The UK government has a long-standing policy of not engaging with the MCB and that has not changed.”
Despite this position, Mayor Khan was joined at the 25th anniversary dinner by Ed Davey, leader of Britain’s Liberal Democrat Party, and Assistant Commissioner the Metropolitan Police, Louisa Rolfe.

Other senior politicians were also seemingly present, including Anas Sarwar, leader of the Scottish Labour Party, Afzal Khan, a Labour MP (and an Islamist), and another Labour MP, Naz Shah.
The senior policewoman thanked the MCB (which she referred to as the “Muslim community”) for its “wise counsel” and told the crowd “We must do better to reflect the communities we serve.”
Indeed, Rolfe, and the leading British politicians present, would have been wise to choose a Muslim organization partner that reflects British Muslim communities at all. A 2016 report by the think tank Policy Exchange revealed that “Groups like the Muslim Council of Britain enjoy the support” of just “2 to 4% of Britain’s Muslims.”
Will Western politicians ever learn to reject Islamists and work with ordinary Muslims instead?
Sam Westrop is the director of Islamist Watch, a project of the Middle East Forum.

9 Of The Best Christmas Markets In London